jessica Care moore is the CEO of Moore Black Press, Executive Producer of Black WOMEN Rock!, and founder of the literacy-driven, Jess Care Moore Foundation.  An internationally renowned poet, playwright, performance artist and producer, she is a distinguished 2016 Kresge Arts Fellow, A 2017 Knight Arts Foundation winner,  and  the 2013 Alain Locke Award Recipient from the Detroit Institute of Arts. moore is the author of The Words Don’t Fit in My Mouth, The Alphabet Verses The Ghetto, God is Not an American, Sunlight Through Bullet Holes, and her forthcoming collection,We Want Our Bodies Back. Her poetry has been heard on stages like Carnegie Hall, Lincoln Center and the London Institute of Contemporary Arts. She has performed all over the world.  jessica Care moore believes poems belong to everywhere and to everyone.  moore recently won a 64,000 Knight Arts Grant for her large scale Afrofuturistic ballet, Salt City, a techno-chorepoem.

She is a highly respected poet among Hip Hop artists, recording with Nas on his 1999 Nastradamus album.  Her recent recordings include the track “Eternal Reflection” on Jeezy’s Church in These Streets, and “Poetry Suite” on Karriem Riggins Head Nod Suite project.  She is signed to Talib Kweli’s Javotti Media Label, who put out her first album, Black Tea – The Legend of Jessi James, which features Jose James, Roy Ayers, Talib Kweli, Wordsworth, One Belo and Ursula Rucker.

Born in Detroit, jessica Care moore first came to national prominence when she won on the legendary “It’s Showtime at the Apollo” competition a record breaking five times in a row. Her searing performance of the poem “Black Statue of Liberty” earned moore several meetings with high profile publishing companies, but in 1997, she paved her own path and launched a publishing company of her own, Moore Black Press. She released her first book, The Words Don’t Fit In My Mouth, and sold more than 20,000 copies. Along with her own work, she proudly published famed poets such Saul Williams, Shariff Simmons, Def Poetry Jam’s co-founder Danny Simmons, NBA player Etan Thomas, Ras Baraka and former Essence Magazine editor Asha Bandele.

jessica Care moore’s work is not limited to her own publications. She has been published in several literary collections, including, 44 on 44, (Third World Press, 2011), A Different Image, (U of D Mercy Press, 2004), Abandon Automobile, (WSU Press, 2001), Listen Up! (Random House, 1999), Step Into A World, (Wiley Publishing, 2001), Role Call (Third World Press, 2002), Bum Rush The Page: A Def Poetry Jam (Crown Publishing, 2001). She is the youngest poet published in the Prentice Hall Anthology of African American Women’s Literature, by Valerie Lee, alongside literary greats such as Zora Neale Hurston, Alice Walker, Octavia Butler, Maya Angelou and many others.

jessica Care moore has graced the cover of The New York Times, The Metro Times, Michigan FrontPage, Detroit News, Detroit Free Press, African Voices Magazine, Black Elegance Magazine, and has been featured in print and online magazines across the world, including, Essence,Huffington Post,Blaze, The Source, Vibe, Bomb, Mosaic, Savoy, One World,  Upscale,Ambassador Magazine, UPTOWN and others. Her multimedia show, God is Not an American, was produced by The Apollo Theater and Time Warner’s NYC Parks Summer Concert Series.  She was the host, writer and co-Executive Producer of the poetry driven television show, Spoken, which was executive produced by and directed by Robert Townsend and aired on The Black Family Channel. moore’s poetry is featured on Nas’ Nastradamus album, Talib Kweli’s Attack The Block Mix Tape, and she is a returning star of Russell Simmons’ HBO Series, “Def Poetry Jam.”

As an activist, jessica Care moore  has lent her powerful voice to the international fight against AIDS. She performed for the United Nations World AIDS Day Commemoration two years in a row and was one of the organizers of Hip-Hop-A-Thon, a concert in San Francisco which helped increase  AIDS education in the Black and Latino Bay-Area communities. moore has also performed in front of  thousands of  people during AIDS WALK Opening Ceremonies in New York City, San Francisco, Los Angeles, Florida and Atlanta. She  is currently on the Executive Board of the Detroit Chapter of the NAACP.

Check out more of JCM at mooreblackpress.com 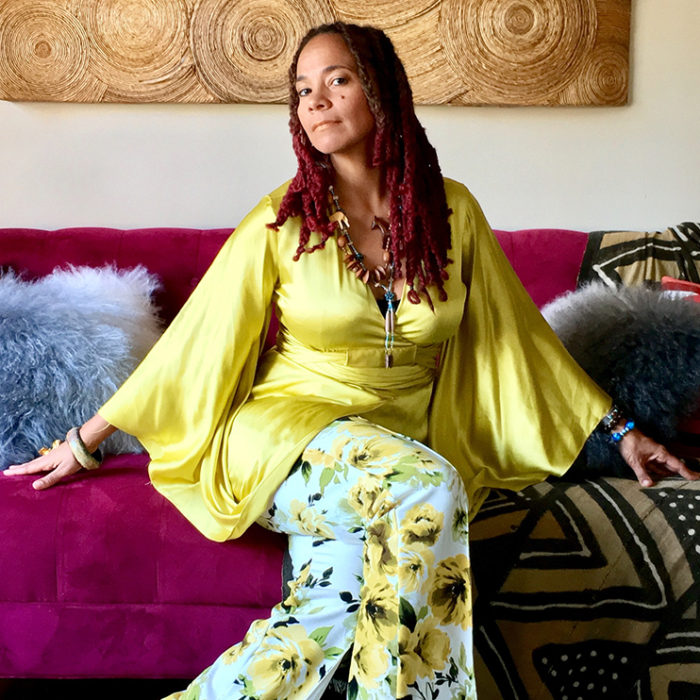