The Garden Of Love – The Songs of William Blake is not the debut album of singer/songwriter/producer/artist Martha Redbone, yet it embodies a sonic rebirth and fuller flowering of her own rootsy ethos. Warm, woodsy melodies take flight through the fusion of largely prewar string-band instrumentation and her heart-worn mountain holler, as Sister Martha tells tales of eternal humanitarian values distilled in the Southland since before America was founded.

Miss Redbone’s music flows equally from her own unique, award-winning blend of Native American elements with funk and her deep roots in Appalachian folk and Piedmont blues favored by the matriarchy that raised her on a rich sojourn from Clinch Mountain, Virginia to Harlan County, Kentucky and beyond to Brooklyn’s Dodge City-esque mean streets. Indeed, Garden Of Love seamlessly evokes the mid-20th century old timey gold rush when such artists as her fellow Kentuckians Jim Ford and Jackie DeShannon fearlessly infused their downhome blues between canyon air ballets and retronuevo cabinessence – before their followers developed newgrass and Redbone’s twangy forebears Buffy Sainte-Marie and Rita Coolidge brought Indigenous concerns to the rock & roll arena in the 1970s. Yet don’t call this project bluegrass or the purists might have a fit.

Redbone, since the establishment of her career in London and New York City, has humbly and steadfastly earned a solid reputation as a sought-after collaborator – whether in the guise of Warner Chappell-minted songwriter, behind the console guide or earnest guest voice — amongst her peers. Working with rising comers like Brit Grammy winner Shola Ama or such legends as Redbone’s Ohio Players/P-Funk mentor Walter “Junie” Morrison, she and UK-bred partner Aaron Whitby consistently provide essential direction and soulful support to knit track and artist into an indelible whole.

Thus it may come as a surprise to some that Redbone, noted for purveying the wilder shores of rhythm & blues on prior releases Home Of the Brave and Skintalk, recorded her new album in the fabled center of country music, Nashville. Yet, proudly retracing the path of her uniquely American mixed heritage back to its earliest source, she is merely taking the inevitable next step of a maverick artist who has never been chained by borders. Americana is her natural homecoming, sonic and otherwise.

The album, produced by Grammy-winning Nitty Gritty Dirt Band founder John McEuen whose recent work includes Steve Martin’s “The Crow”, drafts in a stellar supporting cast that allowed Martha to focus on vocals and deep communion with the spirits of her ancestors, composer David Amram, Seminole elder Lonnie Harrington, and studio veterans Byron House on upright bass and Mark Casstevens on guitar. Reverence and righteous joy from sacred music animate songs like the title track “The Garden of Love”, the glorious “I Rose Up at Dawn of Day,” and haunting “A Dream,” alongside lyrical content from the brilliant mind of Romantic visionary William Blake whose credo ‘Energy is Eternal Delight’ is fiercely reinterpreted for Appalachia. The album resonates with the influence of Redbone’s southeastern raisin’, echoing an earlier time/space through elements of folk, country gospel, stomp chants, and the high lonesome of a front porch Sunday pickin’.

The couple crafted Garden of Love between touring, producing albums at their Brooklyn studio, an ongoing foray into banjo mastery, activism, and the never-ending daily joys of raising a young son during 2011; but the album attains the heights of an imperishable artifact, due to the acute losses of her mother, aunt and other trials amidst the writing and recording process. And so, for a concept that gestated over five years, the album is still right on time – as revision of the artist’s complex American heritage, as loving messages to her child heir to these roots, and a balm for audiences hungering for truth and higher meaning in these turbulent days of 2012.

In the arc of Martha Redbone’s aesthetic journey, Garden Of Love represents the simultaneous retrenchment and innovation so respected in those seminal works of fellow Cosmic Americana pioneers The Byrds via Sweetheart of the Rodeo and The Band on their first two long-players, and it deserves to enter that oh-so hallowed high-tech holler. This here is thoroughly modern music but imbued with rural truth and a slowed roll that has provided sustenance to plainfolks since time immemorial. C’mon, brothers and sisters, and get yourselves back to some semblance of The Garden. 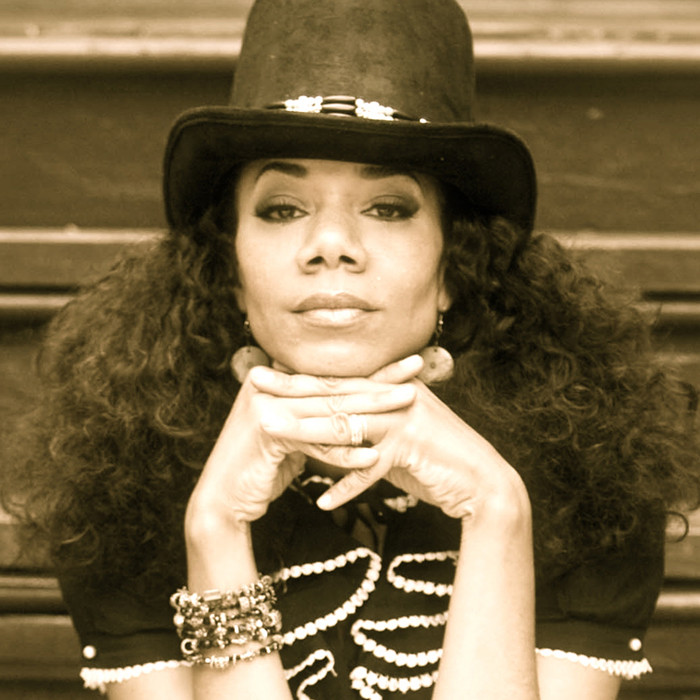