Brooklyn native and resident hardcore-soul queen, Tamar-kali, wields her pen and guitar with equal ferocity. Her hard-rocking brand of outsider art leaps from every track on her 2005 solo EP, Geechee Goddess Hardcore Warrior Soul, enchanting you with its melody, while delivering a swift kick to the gut with its incisive emotional core. Her first full-length release, Black Bottom, packs an even harder punch as audiences are invited to gaze deeper into the recesses of this urban warrior’s mind. Her tales of revolution and love may seem contradictory, but these two worlds are inextricably linked by the powerful artist who grasps for the truth in both ideals.

Whether the darkness in her music can be attributed to deft handling of NYC’s tough underground music scene or 13 years of Catholic school, the listeners can decide, but one thing is for sure – the dramatic intensity of Tamar-kali’s music defies any traditional genre. “Some time ago, I started using the phrase ‘hardcore-soul.’ It appropriately described the soulfulness of my voice and the influence of hardcore. Ultimately, at its widest breadth it’s rock and ranges from classical experimental to aggressive melodic rock.”

Whether channeling Billie Holiday or Bad Brains, Tamar-kali’s influences are secondary to the punk and soul creation borne from her seemingly endless well of ingenuity. Though she’s graced stages from Brooklyn Academy of Music to Lincoln Center to pay tribute to luminaries such as Nina Simone, Betty Davis and Odetta, Tamar-kali reinvents everything that came before her, confidently answering the call for new, fresh music. She can be the silky smooth songstress in her Psychochamber Ensemble or Pseudoacoustic Siren Song outfit, using her unique vocals to weave torch songs about love lost or gained. Or she can be the bandanna-wearing, gypsy woman leading her 5-piece band of rebels to sin or salvation, depending on her mood. Through it all, whether composing the strings of a cello or strumming the strings of a guitar, Tamar-kali’s unique voice and politically-tinged lyrics command attention.

The do-it-yourself ethos of punk music naturally tapped into Tamar-kali’s Gullah nature. “I come from roots people who invented themselves, took what little memories were left of their pasts and forged their own destiny.” After notable tenures as a member of Funkface and Song of Seven, Tamar-kali seized the roles of writer, musician and composer for her solo work, the only way for this distinctive artist to clearly announce her arrival above the din of mediocrity present in the music industry.

Tamar-kali travels a lonely road of independence that finds many artists of her caliber overworked and underappreciated. The uninitiated may have discovered Tamar-kali when she appeared in James Spooner’s award-winning Afro-Punk documentary, with clips of her incendiary performances putting the world on notice to her unsung talent. Others saw her dynamic energy in the Focus Features release – Pariah. After being introduced to her music by cinematographer Bradford Young, director Rees was certain  that her artistry should play a part in the story. In addition to contributing original material, Rees convinced Tamar-kali to do a rendition of The Gossipʼs “Fire with Fire” to close the film. The award-winning movie opened in theaters on December 28, 2011 and the soundtrack is currently available oniTunes.

The orgasmic emotion Tamar-kali brings with every song leaves her peerless above or underground. One thing to remember with Tamar-kali’s sound is, as with any good piece of drama, there’s a twist. Nothing is exactly as it appears to be and the thrill of the unexpected makes her music all the more necessary. 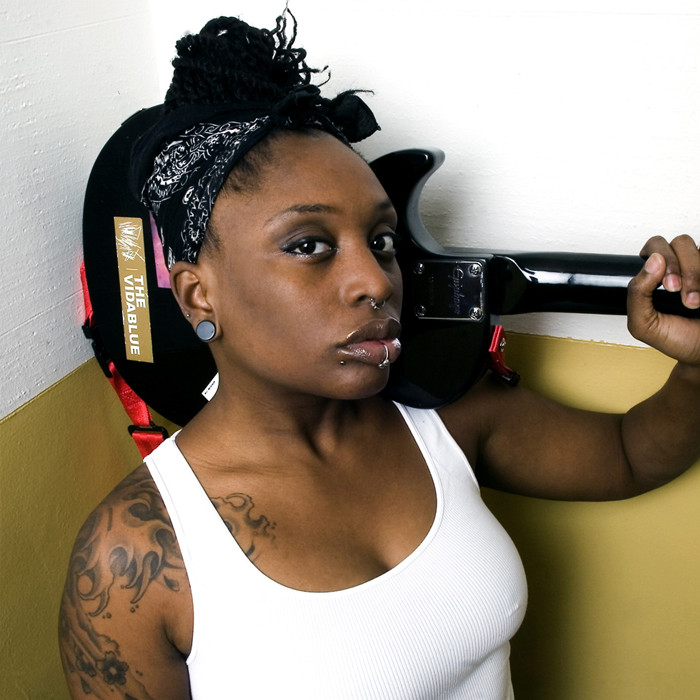